How to override model in Magento 2?

How to reverse string in PHP without using function?

How to run an application in Spring Boot?

How does Kubernetes autoscaling work?

How to show toast in fragments using Kotlin?

The latest update to the main Google algorithm, launched in early August, affected mainly websites from the Medicine / Health category. This is evidenced by the results of a study conducted by the Search Engine Roundtable.

Barry Schwartz, founder and chief editor of Search Engine Roundtable,  analyzed more than 300 sites affected by this update. The results showed that most of them – 42% – were related to topics such as medicine, health, fitness and healthy lifestyles. 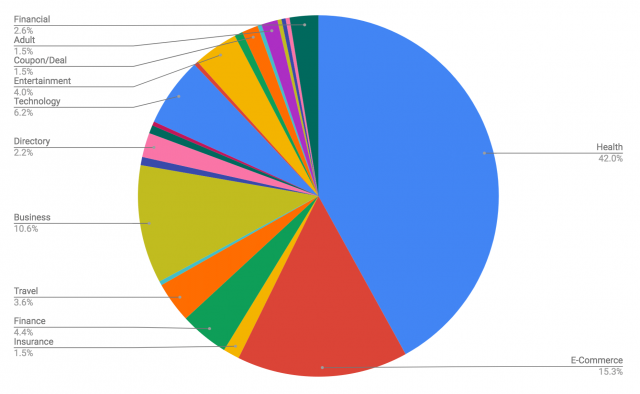 Schwartz noted that although he had conducted such studies more than once, such a pronounced concentration of sites in a particular niche had never been observed before. Usually, updates of the basic algorithm cover resources of all topics.

This time, sites from such categories as e-commerce, insurance, finance, entertainment and others were also affected. But their share is much smaller. However, many of these commercial sites sell products related to health and medicine. Thus, the share of sites from the category “Health” may actually be close to 50%.

With regard to the analyzed sample of resources, it included different countries, languages ​​and types of sites.

Barry Schwartz continues to collect information and does not exclude that the totals may look slightly different. But the current ratio is unlikely to change.

Pinterest growth in 2018 slowed down due to Google update
In 2018, the growth of the visual service Pinterest suffered because of the updated search algorithm Google. This is stated in the application for IPO filed by the company the other day. According to the document, in the first quarter of 2018, Google de-index...
Google Ads and AdSense warned of report failures.
Yesterday, Google Ads users noticed an alert in the service interface that reports for the period from April 30 to May 1 of PST contain incorrect data. Later, the Google Ads team posted the following message on the Google Ads Developer blog : “On May 1, at ab...
Google announced the update of the basic algorithm
This week, Google released the next update of its main algorithm. This was announced by a search representative Danny Sullivan (Danny Sullivan) on Twitter. The launch of the update was launched on March 12th . As for the recommendations for webmasters,...