Google Ads has updated the Keyword Planner so that advertisers can see the most relevant options for the COP.

For example, if the word “boots” is entered, then among the options may be “women’s boots”, “men’s boots”, “work boots” and “cowboy boots”. Advertisers will also have the opportunity to expand their search by adding recommended words to the initial word. 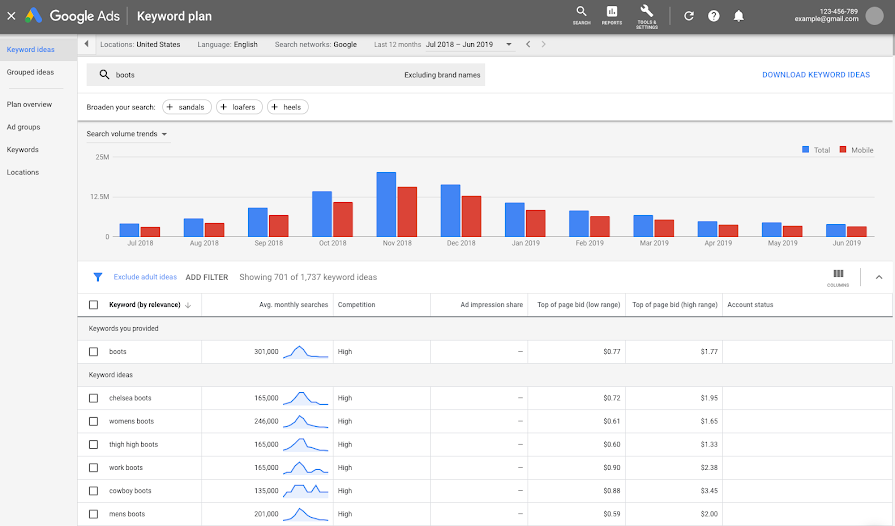 In addition to helping to prioritize keywords, Google Ads also launched two more new features that are designed to give more control over the display of variants of the COP. Among them:

At the moment, all these changes are launched only in the English version of the service. In other languages, they will be available later this year.

Recall that Google launched the Keyword Planner in the new Google Ads interface in 2018. Work on it was completed in May of this year. After the new version of the tool became fully functional, Google stopped supporting the old version of the Scheduler.

AdWords Launches Updated Keyword Planner in New Interface
Google AdWords has launched an updated version of the Keyword Planner in the new service interface. Reports about it Search Engine Land. Information about limited launch also appeared in AdWords Help: “Some advertisers have the opportunity to work with the Key...
Google Ads and AdSense warned of report failures.
Yesterday, Google Ads users noticed an alert in the service interface that reports for the period from April 30 to May 1 of PST contain incorrect data. Later, the Google Ads team posted the following message on the Google Ads Developer blog : “On May 1, at ab...
AdWords Launches Responsive Search Ad Beta
Google AdWords has begun testing responsive search ads. This format allows you to create ads that are automatically composed of the specified elements, taking into account the surrounding content. The beta version is not yet available to all advertisers.   Ad...