According to Bloomberg , during the IPO, the company can raise about $ 1.5 billion and get a valuation of $ 12 billion. As previously reported, Pinterest plans to enter the IPO in mid-April.

In the application, the company also disclosed the latest statistics on the service. So, at the end of 2018, the monthly Pinterest audience was 265 million people against 216 million at December 31, 2017. 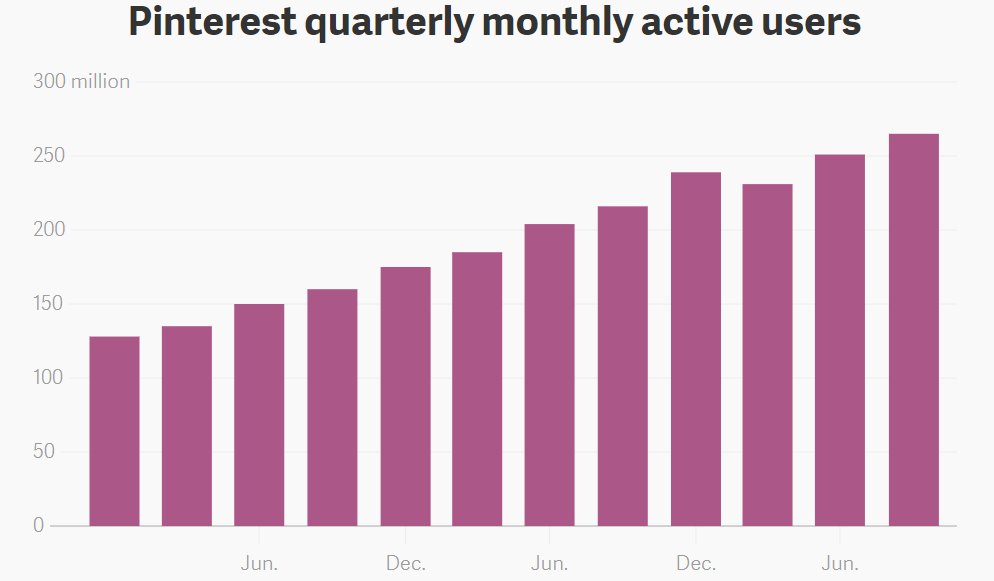 A typical service user is a woman aged 18 to 64 years old with children. According to the latest data, the weaker sex accounts for 80% of the service audience, and only 20% for men.

The average pinner performs 8 search sessions per month, mostly from a smartphone. However, most of the time on the platform, this woman spends looking through “similar pins.” However, it is highly likely to live outside the United States, although the company earns American users 36 times more than foreign ones.

In the US, typical pinners are Millennial mothers who shop more often than the average user in the country.

At the end of 2018, Pinterest users retained a total of over 175 billion pins on more than 4 billion boards. At the same time, more than half of the pinners who visited the service every month went to it at least once a week.

Pinterest shares on the first day of trading rose 28%
The visual search service Pinterest began trading stocks on the New York Stock Exchange. They got the PINS ticker. At the opening, the value of the company’s shares rose by 25% from the IPO price – from $ 19 to $ 23.75 per share, while capitalization exceeded ...
Pinterest growth in 2018 slowed down due to Google update
In 2018, the growth of the visual service Pinterest suffered because of the updated search algorithm Google. This is stated in the application for IPO filed by the company the other day. According to the document, in the first quarter of 2018, Google de-index...
Brave Private Browser accused Google of violating GDPR
The private browser and advertising blocking development team Brave accused Google and other IT companies of violating the provisions of the European General Data Protection Regulation, GDPR. Complaints were filed with the authorities in the UK and Ireland on ...