Pinterest shares on the first day of trading rose 28%

The visual search service Pinterest began trading stocks on the New York Stock Exchange. They got the PINS ticker.

During the course of trading stocks continued to grow. At the end of the trading day, their value increased by 28.42% to $ 24.40 per share, while capitalization approached $ 13 billion. 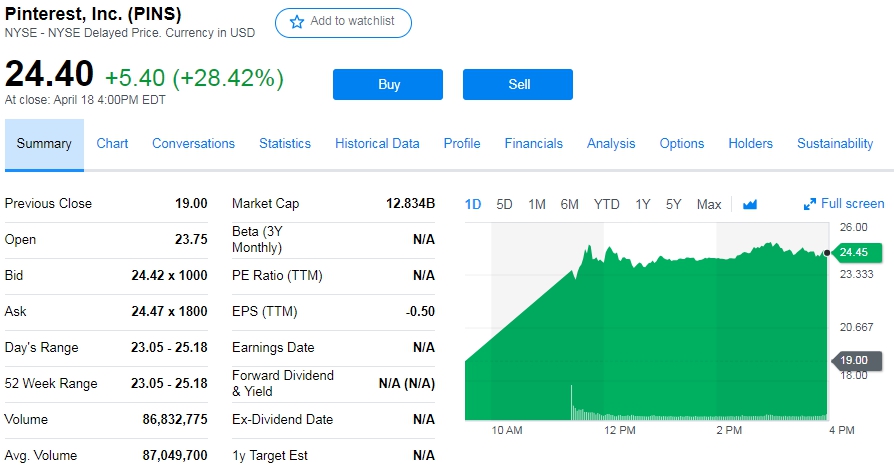 Pinterest filed an official application for an initial public offering (IPO) in March 2019. Before entering the stock exchange, the company valued itself at $ 10-11.3 billion.

At the end of 2018, Pinterest’s monthly audience was 265 million people. A typical user of the service is a woman aged from 18 to 64 years old with children. According to the latest data, the weaker sex accounts for 80% of the service audience, and only 20% for men.

Google AdWords Introduced a New Type Trading Campaigns.
The Google AdWords team has announced the launch of a new type of trading campaign – goal-optimized. Innovation will be available to all advertisers in the coming weeks. A new type of campaign works based on machine learning and is automatically optimized for...
Pinterest filed an official IPO application
On March 22, the visual search engine Pinterest submitted an official application for an initial public offering (IPO). According to Bloomberg , during the IPO, the company can raise about $ 1.5 billion and get a valuation of $ 12 billion. As previously report...
Pinterest growth in 2018 slowed down due to Google update
In 2018, the growth of the visual service Pinterest suffered because of the updated search algorithm Google. This is stated in the application for IPO filed by the company the other day. According to the document, in the first quarter of 2018, Google de-index...