How to run an application in Spring Boot?

How does Kubernetes autoscaling work?

How to show toast in fragments using Kotlin?

How to initialize a lazy collection in Hibernate?

Why is Kubernetes so popular?

Google announced the update of the basic algorithm

This week, Google released the next update of its main algorithm. This was announced by a search representative Danny Sullivan (Danny Sullivan) on Twitter. 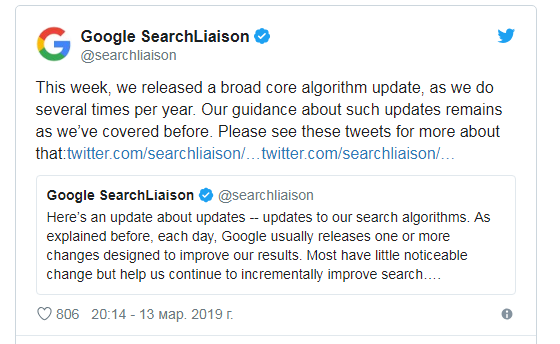 The launch of the update was launched on March 12th .

As for the recommendations for webmasters, they remain the same:

“We have no other advice for those pages whose effectiveness has dropped, except to keep the focus on creating great content. Over time, your content may grow relative to other pages. ”

Thus, if the position of the site has recently changed, this may be due to updating the main algorithm, and not innovations in the work of the resource.

Recall that Google updates the basic algorithm several times a year . The last update of this kind was launched in August 2018. Foreign webmasters called it the “Medic Update” because, according to preliminary data, the update affected mainly resources from the category “Health”.

Google has updated its main algorithm.
This week, Google has once again updated its main algorithm. This was announced by search officer Danny Sullivan on Twitter: Google SearchLiaison ✔@searchliaison This week we released a broad core algorithm update, as we do several times per...
The last Google update affected mainly sites from the Health category.
The latest update to the main Google algorithm, launched in early August, affected mainly websites from the Medicine / Health category. This is evidenced by the results of a study conducted by the Search Engine Roundtable. Barry Schwartz, founder and chief edi...
Pinterest growth in 2018 slowed down due to Google update
In 2018, the growth of the visual service Pinterest suffered because of the updated search algorithm Google. This is stated in the application for IPO filed by the company the other day. According to the document, in the first quarter of 2018, Google de-index...